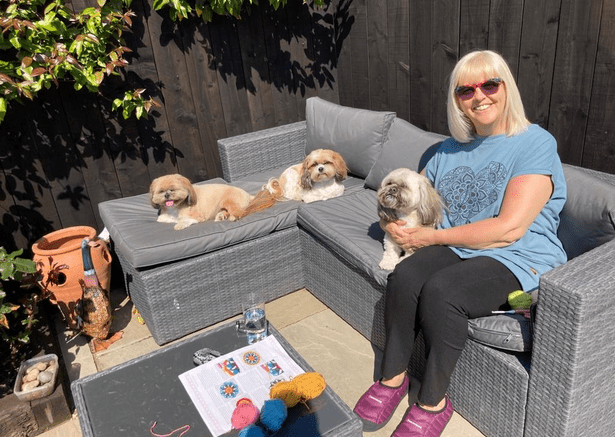 A grandmother who was lucky not to be paralysed when she suffered a stroke has turned her life around.

Just a week after Sharon Walker’s 61st birthday, in May 2021, she suffered a stroke while in her Marske home. The mental health nurse was told by doctors that if the stroke had occurred just millimetres in another direction she would have been paralysed.

The health scare made the 62-year-old rethink everything and Sharon decided to start her weight loss journey so she can “stick around” for her family and grandchildren. “One Sunday morning I got up with our three dogs and bent down to fuss them as I do – but just didn’t feel right. I began to get pins and needles in my tongue and face, I worked with patients who had strokes and my mam suffered strokes for 17 years so I just knew,” said Sharon, who used to work at Roseberry Park.

“I shouted my husband to ring 999 and my leg gave way, both of my eyes then went in opposite directions and doctors in the hospital said I could’ve been paralysed. On the run up to having the stroke my eyes were really sensitive to bright lights, I was struggling in my face mask at work, the pressure from work and my husband having a heart attack in 2020 all began to build and that’s what lead to the stroke.”

Sharon found out that she had a gene which made her more susceptible to strokes, which she inherited from her mum. On the road to recovery Sharon returned to work in January of this year, but packed in her job at the NHS after 23 years as she didn’t want work stress to cause another stroke in the future.

Sharon added: “It was a difficult decision but I didn’t want the pressure and stress of work to bring on another stroke, my family and grandchildren are far too important and you can’t put a price on your health.”

Mum to Paul and Shaun Jones and wife of Derek, 71, Sharon decided she wanted to keep her health on track by joining Slimming World. Sharon said: “I had my first son at 18 and had always been on some form of diet or eating plan for as long as I can remember, I joined Slimming World before my stroke but with work it was really hard to be in the right mind frame for it so I lost track of it all. I felt miserable in myself and wanted to do something about it.

“Having the stroke altered something in my mindset and I decided I had to do something about it. I also had to try to get my cholesterol down too so threw myself into the Slimming World programme. My group is ran by Stevie Muscroft and are like my own little family, they sent me flowers when I had my stroke and it meant so much to me – I’ve managed to lose two stone and a half stone – I never want to see those old numbers on the scale ever again!”

Sharon now regularly attends Stevie’s Slimming World group in Saltburn on a Saturday morning, and was even voted the group woman of the year recently. Almost exactly a year on from her stroke, Sharon hit her target weight in May this year, and is on the road to a full recovery.

Sharon added: “I’m the money woman at group on a Saturday morning and I love it! I want to be around for a long time and doing Slimming World has ensured just that. My focus has shifted completely since my stroke and I wanted to give myself a good chance in life again.

“The support I’ve had from my family has been invaluable, especially off my husband and two sons. It’s been a rollercoaster to lose this weight but it’s finally where I want it to be.”