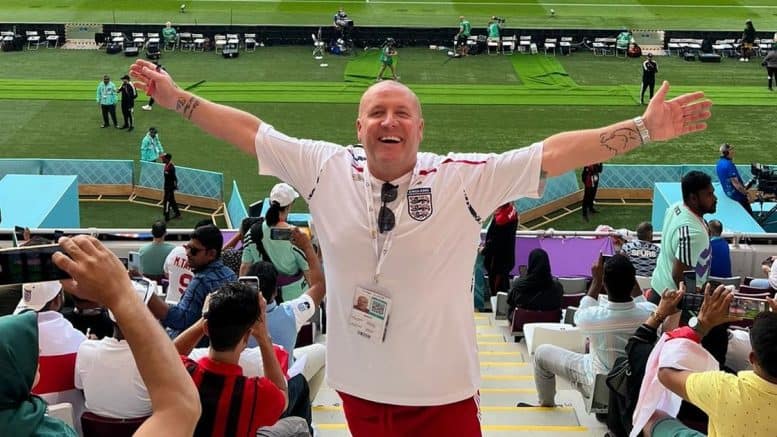 A Nunthorpe dad is flying the flag for Teesside as he supports the England squad in Qatar.

Boro fan Andrew ‘Picko’ Pickering has travelled to watch his sixth World Cup tournament and he is having the time of his life. With his son Klayton by his side, the 52-year-old was there to cheer on the boys at Doha Stadium on Monday where they thrashed Iran 6-2.

He has described the kick-off to the games as a ‘special’ event to share with his 21-year-old son and is hoping that this will be the year football is coming home.

The England team got off to a great start with a whopping six goals, but can they shoot their way to victory? Picko certainly thinks so.

Just two days before the World Cup kicked off, on Friday, officials shocked and devastated fans by announcing that fans wouldn’t be allowed to drink in any of the eight stadiums hosting games in the country. However, Andrew has told us this isn’t completely true.

He explained he had a “bit of a sore head this morning” and added: “Let’s just say you can drink in Qatar. Drinks are allowed in the hospitality and VIP section of the grounds of the stadium and most hotel bars.”

This would be welcome news to travelling fans celebrating England’s thrilling first match. The footie fan also commented on the excellent organisation at the games and how welcome he has felt in Doha.

After celebrating the big win on Monday, he wasn’t taking time to recuperate before heading out again to make sure he didn’t miss a moment of the action. The Nunthorpe native was heading back out to Stadium 974 in Ras Abu Aboud to watch Mexico face off against Poland, and his money was on Mexico for the win.

On England’s first winning match, Andy said: “What an atmosphere [the match] was with my son Klayton. It’s my sixth World Cup and it was special to share with my son.”

He added: “England got off to a great start with 6-2. The other teams will be looking at us now thinking they’re ready. Can we go all the way this time?

“I sure think so – I am here to find out and have some fun on the way.”

The England team plays its next match against the USA on Friday, November 25, at 7pm. To virtually support on Gareth Southgate and his team click here to find our ‘cheer map’!

And click here to scroll through pictures of Teessiders lapping up every moment of the game on Monday against Iran.