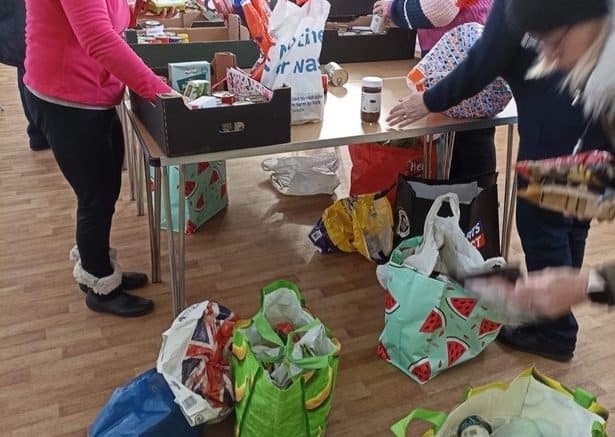 A Teesside food bank is being flooded with referrals for desperate families, with people regularly claiming they “haven’t eaten for two or three days”.

Volunteers at the independently-run scheme say wage cuts and soaring food and fuel bills are leaving people with no option but to visit them.

Volunteer Lesley Collinson said: “There are often people who come and say ‘I’ve not eaten for two or three days’. They can get quite upset when they come in for the first time.

“They say they’ve never had to do anything like this before. We have little places we can take people off into – a corner to let them say what they need to say.

“We see people in work, with mortgages that have had hours cut or on minimum wage. Firms are cutting back and it can have a knock-on effect.

“The more privileged you are, the harder it can be to acknowledge you need help. But people who do pluck up the courage to come find a very friendly set of people here.”

“We did 70 referrals – the same week last year, it was 20,” she continued. “That’s a record for us. It’s been steadily increasing, people don’t always come every week.

“They wait until the point at which they can’t manage, which is absolutely very fair and helpful of them, that they are working hard to manage themselves. But the last three weeks, we’ve had 68 to 70, which is huge.

“When you work on three-day supplies with three meals a day, it’s more than 2,000 meals in the last week.” The team makes it as “easy as possible” for people who visit – but the food bank is clear about only working on a referrals basis.

“It’s important for the people that donate that things are being handed out fairly, we do it in the most compassionate and friendly way,” Lesley adds. “People will always be made to feel welcome.

“We will advise people on the relevant agencies but we don’t pretend to be experts in any sort of counselling.” Families can find it particularly difficult, Lesley says, but they often have greater access to support through schools.

“I think it’s even more difficult for single people, they can get very lonely. We see a number of men who are quite isolated.

“One man who had a history of alcohol abuse told me ‘I like coming here because I’m not judged’. That was very affirming for us to hear we felt humbled.”

Last year the food bank gave away £55,000 worth of food – this year it will be “a lot more”, Lesley predicts. “We have people who regularly donate and are very generous – either food or cash – we are very fortunate.

“We are having to look carefully at what food we buy to top up the parcels. We were shell-shocked when we saw how empty the shelves were recently when we’d just spent such a lot of money.”

And while she thinks a ’30p a meal’ budget may be unrealistic, she believes better education would go a long way.

“It’s very interesting that some people are able to make those sort of statements that have never had a 30p meal. But a lot of people do not have access to basic skills and knowledge, we have people who refuse the fresh veg – carrots, onions, potatoes – because they don’t really know what to do with them.

“We would love to provide that kind of support but we don’t have the resources.” In-demand items can vary, but at the minute it’s “pasta, rice, soups and cereals”. “Last year we couldn’t move for beans and spaghetti hoops, now we’ve got bare shelves,” Lesley says.

“And things like canned stews, Pek, although we know how dear those things can be. And biscuits. Okay, they’re not essential but they are nice to have. It’s good to put a packet of biscuits into the bags.”

Families and households are referred through schools, the CAB, housing associations, social workers – “anybody with a professional connection” to them. Donations can be left directly at Thornaby Baptist Church, Thorntree Road, Wednesday 10.30am – noon and Thursday 10am – 1pm.

For breaking news in your area direct to your inbox every day, go here to sign up to our free newsletter