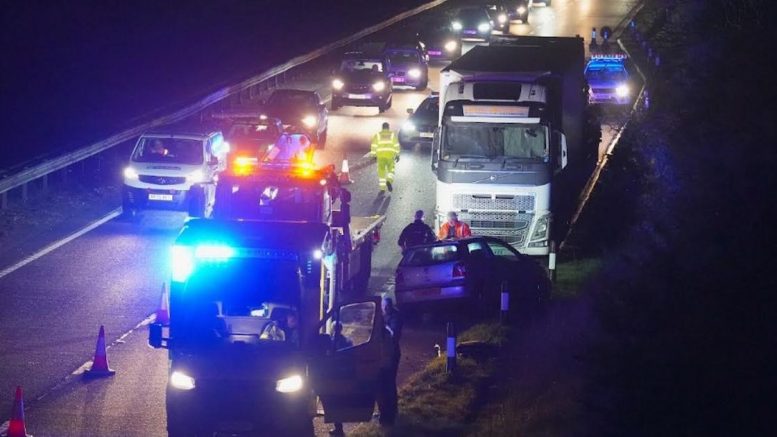 Part of the A19 was closed after a crash involving a car and a lorry.

Police, fire and ambulance crews were called to the northbound carriageway near Crathorne on Monday. The road was closed from 10pm while emergency services dealt with the incident.

A spokeswoman for Cleveland Police confirmed two people were taken to hospital following the crash. They both suffered minor injuries.

“Police attended a report of a collision on the A19 around two miles from the A174 Parkway Interchange at 10pm on Monday,” the spokeswoman said in a statement. “A VW Polo was in collision with a HGV and the male driver and passenger from the VW were taken to hospital with minor injuries.”

A picture from the scene showed the damaged car facing the wrong way on the road. The vehicle was recovered and the scene reopened around 1.40am on Tuesday.

Four engines from Middlesbrough, Stockton and Thornaby arrived at the scene at 10.07pm. Crews worked to make the scene safe before leaving around 30 minutes later.

A North East Ambulance Service spokesperson added: “We were called to reports of a road traffic collision on the A19 northbound in the Castlelevington area shortly before 10pm on 18 April. We dispatched one ambulance crew, a specialist paramedic and an officer, and transported one patient to James Cook Hospital for further treatment.”

For the latest local breaking news direct to your inbox as it happens, go here to sign up to our free newsletter